Council and NHS chiefs are asking the people of Manchester for their ideas on how health and social care services could be improved and more cost-effective.

The call follows the publication of a draft plan – called ‘A Healthier Manchester’ – which outlines transformation work to improve health outcomes across the city over the next five years.

The plan – which is available online and also in print libraries, GP surgeries and other public places – got the go-ahead last month for a 12-week period where everyone who lives in the city is invited to get involved and take part in a short survey. All feedback will then be collated, analysed and will help to inform the final version due in April.

Key parts of the document revolve around three main themes of changing how services are commissioned; developing single teams in the community made up of health and social care staff; and having a single contract for commissioning hospital services.

Overall, the plan calls for a shift in approach, so that more emphasis is placed on preventing people from becoming ill. This is linked to new ways of working so that health and social teams work much more closely together. The plan also calls community input in helping to make the city more healthy.

One man who is already doing this is boxing coach Steve Egan – his story is below:

We talk to the boxing coach who insists on knockout results in the gym – and in the classroom.

“We’re not just here to box, we’re here to keep kids fit, healthy and on the right track doing well at school – so they can make the most of their lives,” says boxing coach Steve Egan.
And, after coaching for 36 years, Steve, 53, knows just how to pack a punch in the gym – and make a mark on the aspirations of the countless youngsters who have passed through the doors of his amateur boxing club.

Jimmy Egan’s Gym is a well-known institution in Wythenshawe – but its previous nomadic existence in other parts of the city has also had a wider impact across Manchester.

The gym, opened in 1980 by Steve’s Dad, Jimmy, was born out of a passion for the sport – and a strong sense of social responsibility. And it was Steve’s interest in boxing that led to Egan senior opening the now-legendary gym in the first place.

“A lot of people think that Dad got me into boxing – but really it was the other way around. I loved it so much that it rekindled those feelings in my Dad too,” says Steve.

“Dad used to box in the army – but he was very modest about it and he never used to push it on me. But, when he saw how I was being trained he knew it could be done better, so he started the gym from there when I was 18.”

Since the gym opened the father-son duo was clear that the gym had to be as much about health and personal growth as much as the sport. Over the years it has hit the headlines for the amateur champs it produced – but Steve insists that the personal victories have been just as valid.

“Our main aim has always been about teaching kids that fitness and boxing is about discipline, control and making good choices. It all starts with respect too – you have to start by respecting your Mam and Dad and then everything else stems from there,” he says.

“Over the years we’ve had a lot of kids – boys and girls – who could have gone off the rails. But, we’ve worked with them – shown them how sport can improve your health, your mind and attitude too.

“The great thing about the training is that it leaves you tired – and that takes the aggression away from a lot of the kids, because they have a better focus for channelling their energy. It’s a mistake to think boxing is all about aggression – it isn’t – it’s about focus and precision and giving your best performance.”

And Steve practices what he preaches. By day he is a painter and decorator -priding himself on doing a good job. But, by the evening he heads to his gym, working alongside brother Shaun, where he talks to youngsters – ranging from 6 years old upwards – about the sport, eating well, and community pride. For the young ones the focus is on non-contact fitness and fun and learning how to have a healthy approach to life.

Steve calls himself a boxing coach – but in many ways that role has extended to a life-coach as he insists that youngsters who get bad reports from school –or their parents – are banned from the gym for a week. This alternative ‘time-out’ has seen excellent results.

“There is a big connection between discipline in this sport and results,” he explains. “So, if the kids here are not respectful and get a bad report from school – then no, they are not entitled to get in the ring.

“Some of the lads I’ve worked with will admit that they were heading down the wrong path and they needed to learn the ground rules again. There’s nothing better for me than when I hear that one of the lads has done well at school or is making the most of their lives.”

These are the results and the drive that gave Dad Jimmy the will to visit the gym even in the week before he died in 2004, from cancer.

“That’s the sort of passion that keeps me going, too, says Steve. “This business isn’t just about titles – because the biggest fight can be about believing in yourself, staying healthy and knowing how you can contribute to life.

“Health, fitness and a good attitude are as valuable as any pair of boxing gloves. In a way we are turning out health-fighters as well as boxing champs.”

When asked about the future and the possibility of hanging up those boxing gloves, Steve is defiant: “We’ll keep going while we can help kids.,” he says.

“My Dad’s last words were ‘look after your Mam and the gym goes on’.”

Devo Diary: What's happened one year on since the historic health and care agreement for Greater Manchester

Have your say on new ten-year vision for Manchester Parks 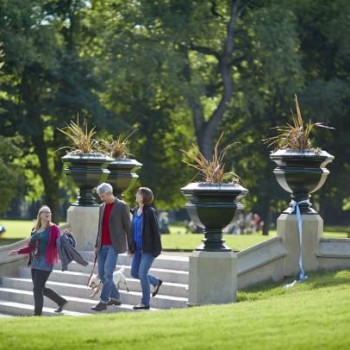