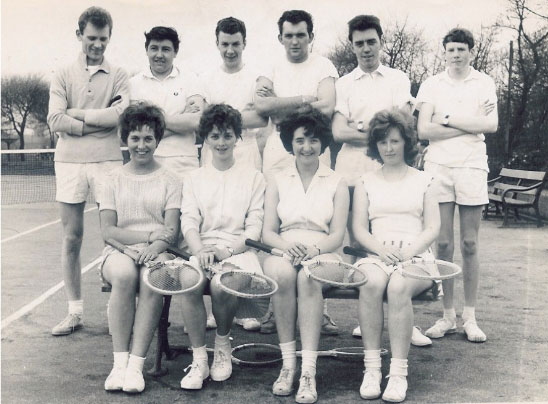 I’d like to share with you some of my photos of Philips Park. Above is a picture of the Philips Park tennis club around about 1960. 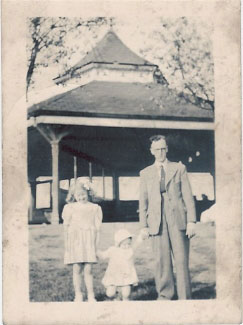 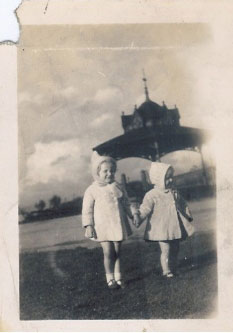 Left my father, Francis French, as well as my sister Cecilia and myself in the park sometime around 1950. We’re standing near one of the shelters, rather fine ironwork structures found around the park at that time. (Some people say this was called the ‘Monkey House’).
Right is of myself and Alma Redford about 1946 in front of another shelter. 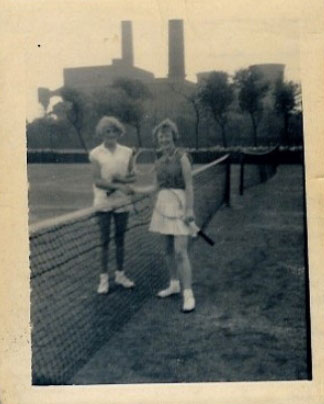 Right is of me and Alma Redford again, after playing in the club championship final. In the background you can see Stuart Street power station, which is where the Velodrome now is. Unfortunately, I don’t have any photos of the bowling green area. This was a very popular activity in the park and my father played for the local team all his life. The head park-keeper in those days was Mr Sides who lived with his wife in the Lodge at
the main entrance (on the corner of Stuart Street and Mill Street). They started a tennis club to teach local children to play tennis, myself included! We were eventually good enough to join the Manchester Parks league and every Saturday during the summer we played matches against other parks all over Manchester. The teams loved coming to Phillips Park because they were always treated to a delicious afternoon tea of home-made cakes and scones, made by a local women’s group that was led by my mother (we made her a badge with “I’m in charge” engraved on it which she proudly wore whilst supervising the tea).

Once I started to play tennis, that’s how I spent my holidays and weekends in the park. Before that, we spent all our spare time in the park just generally amusing ourselves – playing football, cricket, hide and seek, fishing in the ponds, boating on the lake, sliding down the slopes in the snow, etc. On most days, we would only go home when we were hungry!

There were park-keepers to keep an eye on us and nobody worried about our safety. The only accidents were things we brought on ourselves, like my cousin jumping out of a high tree and breaking both arms!

One thing that still makes me laugh is that we were n’t allowed to ride bikes in the park and to this day, I still can’t ride a bike!

When I was about 12 years old there used to be a children’s membership club for Philips Park, which was run from the Lodge. Kids could join the club and when you joined you got a green badge and a certificate and you would watch out for the plants and look after the park.

I would go in the park every night and day with my friends. You made your own entertainment years ago because there was nothing else to do, so you used the park. You’d go out with a bottle of water and jam butties and stay in the park all day.

They were what we called “Cockies”, who took care of park security. They were a bit like the wardens today. They carried a whistle and if there
was any trouble in the park they blew it. The kids were frightened of the Cockies, so there was no messing about. Near to the play area there was a building that the Cockies used, which had a toilet in it.

When I was young there were two bowling greens in the park. One was for practicing and one was the main green, and neither had a fence. You we
ren’t allowed on the grass, and you daren’t go on it. We used to get our kicks out of running over it, but if you got caught…! There is now only one bowling green. The peace garden is where the second green was. There was also a wooden hut, which was used to store the bowls. This was near where the peace garden is now, but was vandalised and taken down in the early 1980s.

There used to be a field where the allotments are now and we used to play football there. There were also tennis courts.

As you go through the gate that is on Alan Turing way, there used to be a water fountain for drinking water before you got to the valley. This was more than 30 years ago. There was also a wooden cafe facing it. Near to that there used to be a second lake, which had swans in it and you had to climb down to get to the lake.

The lake that is still there used to have rowing and paddle boats in it, which you could hire for about 6 pence. They had numbers on the side and the man would call you in when your time was up. There was always a large queue for the boats.

People used to come from all over Manchester to Philips Park. I remember speaking with on girl when I was younger and she had got the bus from Chorlton, which was a long way in those days.

The park had an Olympic size swimming pool too. This was when my dad was young, and the athletes used to train in it.

There was a prison at the back of Belle Vue on Redgate Lane, which was knocked down around the 1840s. Some of the bricks from the prison were used in the wall to the park.

Industry
Most people worked at Richard Johnson’s Steel works, the abattoir or Bradford Pit. Johnson’s made wire fencing and closed down at the end of the
1980s. The abattoir was the slaughterhouse and I remember my Mam being sick because of the smell. There was also Marsden Mill, which was on Gibbon Street. They worked really long hours in bare feet and it was very competitive. If you didn’t turn up one day then someone else would have your job.

The viaduct used to go from the power works to Bradford Pit. There were 2 or 3 benches under the arches of the viaduct, where a tramp that we called Gulliver used to sleep. He wasn’t as old as he looked and I remember watching him drink a bottle of sour milk and it knocked me sick.

We used to take a pram to Bradford Pit to steal the coal for our fire. It was one of the largest and deepest mines in Europe. Apparently it stretches to Leigh and Wigan. Everyone knew someone who worked there. My dad was a coal man. I remember he had a leather thing with studs on his back so if he was carrying a sack of coal on his back it couldn’t hurt.

The workers there would be ingrained in dirt. They’d even have a shower at the pit, but they’d still be dirty. You could see it their eyes. I remember one year the miners got stuck under ground, but it closed in about 1967. The seam goes under the new stadium.

As children we used to mess about in the pit. I remember the girls would sneak into the men’s showers to have a look at the men!

There were big cooling towers years ago too. Jimmy Saville blew them up in the 1980s. But when they were there they would soak the streets like it had been raining.

The chemical works used to make the windows orange and yellow, and you would get blue pigeons. If you looked into them after they closed everything was blue inside. And there was a school right next to it! I used to take the dog up there, and all his paws would be blue, so I don’t go there anymore. They are demolishing it now.

Whit Walks
St Paul’s Church was on Wydale Close and there was a Church Hall that backed on to the Park. The Church Lads Brigade, to which I belonged, was based there. We trained once a week when I was about 12 years old. During Whit Week we would be in the Whit walks, which set off from the Church Hall at 7am. We would then walk all the way up to town and meet all the other Churches in the area. We would then listen to the service and walk all the way back again. For the walks you would always have new clothes, even though we couldn’t afford it. We would but on credit and spend the next year paying it off. When we got dressed up we would go round to other people’s houses and they would give us money for wearing our best clothes.
Shops
Where the ‘B of the Bang’ sculpture is now, the road used to be bumper to bumper with shops. I remember that in one of the shops there was a live monkey in the window, but I don’t remember what kind of shop it was. There was a fishmonger too. It had rabbits and hares hung up outside!

In those days you could buy on tick (get credit). The shopkeeper would have a green tick book that he would write in. And you would know the
shopkeeper and he would know you. You would go in there for a chat. There was a chair in the shop where you could sit down and gabble. There was a real sense of community. You really could leave your back door open… but then nobody had anything to steal in those days!

Vivien Neilds was kind enough to share with us photographs of her family enjoying Philips Park in 1950s.

You can see the magnificent displays of the summer bedding that was timely spent planting. Her family visited Philips Park regularly for walks, and taking in the natural surrounds as well as the children watching the wildlife. 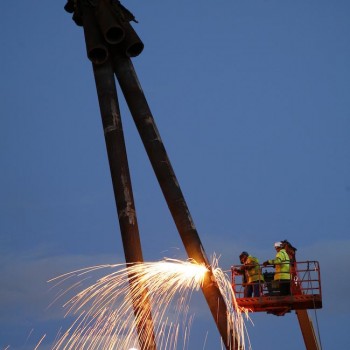 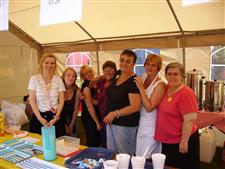